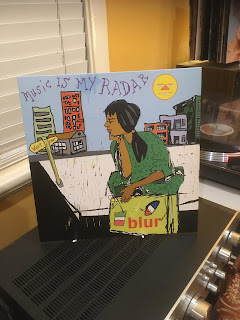 For those of us who were into pop-rock in the 1990’s Blur really did seem like our generation’s Beatles. They wrote smart well arranged melodic music that was both artistically on the money and also popular. They had a distinct artistic arc during which they became both more experimental and more mature. Music is my Radar was the pinnacle of that process, a stand-alone single that ended up on their best of album released in the same year.

Music is my Radar is a metronomic funked out road-trip through rhythmic excess, ending in an unfurling guitar fuzz freakout. As great as this track is it is the B-side, Black Book, that really does it for me, it’s one of those songs that is both uplifting and melancholic. When I bought this single from Dada Records in the year it was released I was going through one of those dark night of the soul periods. My father died in the same month as its release (October) after years of illness and during the period I had to deal both with his death and its aftermath this single was the first thing I played when I got home and then again once at least half the bottle of wine had gone. It helped get me through and I now realise that for me never has a song been so aptly named. 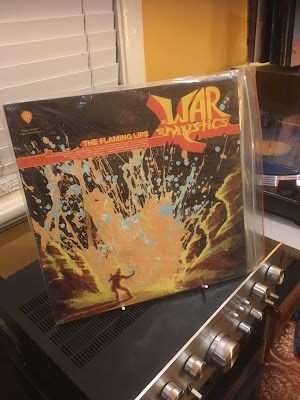 The Flaming Lips are one of the great band of freaks and I love them for it. However when this album came out in 2006 the feeling was that they were kind of careering into the realm of overfamiliarity after the ubiquity of the brilliant albums The Soft Bulletin (1999) and Yoshimi Battles the Pink Robots (2002). At the time I thought that At War With the Mystics was merely a pretty solid album that my Rasta friend and I certainly enjoyed when in the mood. However recent listens have convinced me that it’s really a great album and it’s more overtly cultural/political moments are fit for our extreme times, perhaps more so than during the Bush era (not the band, hahaha etc…). Trump even gets a mention  - “Oh no no your’e turning into a poor man’s Donald Trump, I know these circumstances make you wanna jump…”. But it’s the beautiful, proggy Floyd-like psychedelia on this album that really holds up today, songs like Vein of Stars, My Cosmic Autumn Rebellion and Pompeii Am Gotterdammerung absolutely pulse through the body when played loud through a late 70’s Kenwood amp.

This pressing, a double, with one blue and one red, was bought in the year of its release from Dada Records for $48, which was quite expensive at the time. But as usual, some 14 years later I’m not thinking that I wish I had that money, but instead thank fuck I have this awesome record! 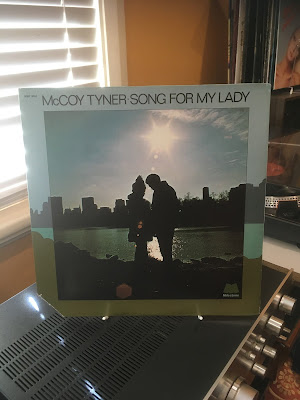 I bought this album only recently for $20 from Moogy’s Mobile Record Store. Moogy is Kim Williams, who co-wrote The Scientist’s song Swampland with Kim Salmon, among other claims to fame. McCoy Tyner is my favourite jazz pianist and as everyone should know prior to his solo career he played in John Coltrane’s great mid sixties band. Basically Tyner’s solo career was one amazing album after another and Song For My Lady is a perfect example of his vibrant, fluid style of playing. His compositions are superb too.

The amazing thing about this album is that when I got it home I realised that it was still sealed in shrink-wrap! Whomever owned it had never played it and therefore I assume that I’m only the second owner in 47 years! I opened it to reveal both a pristine pressing and some 47 year old dust, probably skin flakes from the guys who processed it! It was a cut-out so perhaps the original owner was enticed by its cheapness, but never got around to playing it. Of course I did, and it is superb. 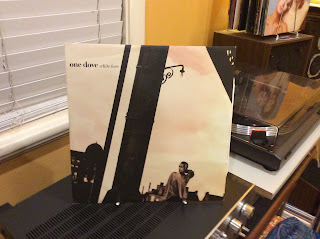 One Dove’s White Love is one of those blissfully exultant songs that evokes that weird feeling of nostalgia for nothing in particular, even from the first time you hear it. I first heard this song in a North Perth share house in 1993. One of my house-mates had bought the CD single that featured four versions of the song. He played it to death as he lounged on his bed at the back of the house. He was a louche character and in a short period of time I started to refer to him as ‘The Lizard Man’, mainly due to his cold-blooded attitude toward women, whom he regarded primarily as a means to an end. His face was hawk-like, his skin slack and ruddy from beer, yet he managed to bed a number of women whilst variations of this song barely covered up the noise of their exertions.

Fast forward to 2004 and I stumbled across this copy at Dada Records for a measly $5. It features the ‘radio mix’, the ‘meet the professionals mix’ and a ‘guitar paradise mix’, all executed by that autodidact genius of sound, Andrew Weatherall. Unfortunately it doesn’t feature the ‘lonesome demo’ version from the Lizard Man’s CD version. None-the-less this is a brilliant 12” single and a perfect example of some of what was going on in music in Britain in the early 1990’s. 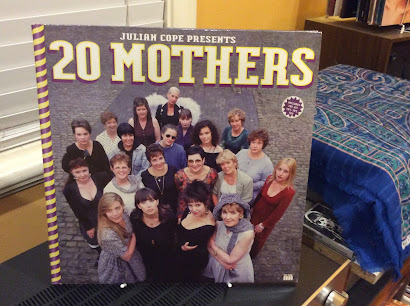 Right at the end of the 1990s I fell hard for the likes of Julian Cope. I was at a good friend of mine's house (Andrew Lindsay), and he put on Cope’s band The Teardrop Explodes album Kilimanjaro (1980) and it was one of those moments when you totally connect with the music. I had to have more and what followed was one of those obsessive periods in which you buy whatever you can get your hands on. Luckily in the late 1990's barely anyone was buying vinyl; in fact it was around 2000 that sales of vinyl dropped to their lowest point before a slow upswing began, leading to the vinyl revival of the 2010s. So when I stepped into Dada records in the heart of Perth there were many Cope records just sitting there from when they were released. I think the owner cottoned on and one day in 2000 20 Mothers appeared in the racks and it was mine.

It's a beautiful pressing - swirling purple vinyl, paper inner sleeves and a gatefold housing both discs that features Cope gurning along with dozens of women with their partners and kids, no doubt they were all from near where he was living. The cover features Cope's wife, Dorian (front right in black) and his mother-in -law (to the right of Dorian). The music is a typical blend of whacked-out psych-pop, mad ditties and space rock; when you have tracks like Greedhead Detector, Just Like Pooh Bear and Don't Take Roots there's no resisting. Julian Cope is every psychonaut's musical spirit guide. As it says on the record label - 'Better to light a candle than to curse the darkness.’

Songs from the Broadway Production of The Catherine Wheel: David Byrne - 1981 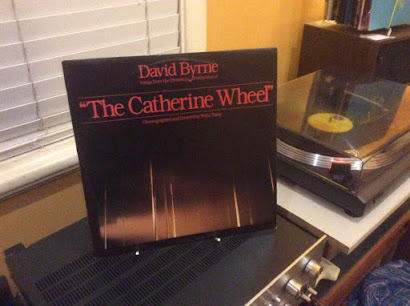 From my early teens in the 1980s I was enamoured with Talking Heads, so when I saw a copy of this album in a friend’s collection I taped it and listened to it regularly for years until I bought it on CD sometime in the 1990s. This particular vinyl copy was purchased from Midland Records in 2019 and is in beautiful condition. I wonder how much it was played before I got my hands on it? Not much I’d say. It’s not difficult listening by any means, featuring some beautiful atmospheric and ambient instrumentals with evocative names such as Light Bath and Cloud Chamber. The vocal tracks are as close to the sound of Talking Heads that Byrne got in his solo career. The strangely emotional What a Day That Was could have been a hit single, well, if the buying public was populated by reserved nerdy types who liked their intellectual pop music.

The Catherine Wheel features both Brian Eno and Adrian Belew, among others, such as Jerry Harrison and Funkadelic’s Bernie Worrell. Belew plays ‘steel drum guitar’ and ‘floating guitars’, of course, and Eno plays ‘prophet scream’ and just the plain old bass guitar. God knows what Twyla Tharp’s dance production was like, fairly avant-guard by the look of the pictures on the sleeve, but the music is beautiful, funky, ambient and psychedelic in parts - great drug music basically, or great laying in bed music with soft lights glowing. It’s also great music to play friends who love obscurely pretentious albums that are actually really fucking amazing. 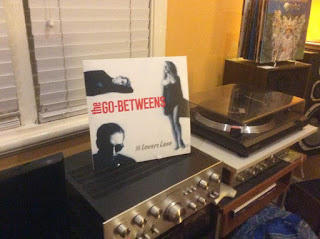 Like pretty much everyone else, unfortunately for the band, I liked The Go-Betweens in the 1980s, but never bought their records. I have a reasonably good excuse however, I was a poor teenager with not much jangling around in my pockets to buy that many records. I didn’t really connect with them in a serious way again until 2015 when I bought G Stands for Go-Betweens: Vol.1, a box set of their first three albums plus EPs and rarities. How I fell for them, swooning into their literary pop-rock pretense. 16 Lovers Lane is one of their greatest achievements and one of the great melodic pop-rock albums, period. It contains two of my favourite Go-Betweens songs, Grant McLennan’s confessional Quiet Heart (which is also my partner’s favourite song of theirs) and Robert Forster’s plaintive Dive for Your Memory. I was always a sucker for melancholy.

I’m pretty sure that I bought this second hand album in Melbourne from Dixon’s Recycled Records in Fitzroy, from the look of the price sticker, maybe in the early 2000s. Every record stores’ price sticker is like a finger-print. You’ll notice that the majority of my records have the price sticker on the inside of the record sleeve, as a permanent reminder of how much I paid for it and where I bought it from, which is all part of the history of that record.
Posted by Jeremy at 05:40 1 comment:

Welcome to Closed Groove. This is my record collection. You may have come to this blog because you found the information sheet inside a record detailing my thoughts about the record, what it meant to me and what was going on in my life at the time. Possibly this is the far future, I am gone and my record collection is scattered to the winds - this is the access point detailing what the collection contained. Vinyl represents a certain slice of history, not just for the acts who recorded the music, but just as importantly for the people who owned the records. This blog is a little of that history.